I didn’t think traffic in Japan would be too different from Germany, except the driving-on-the-left-side part. The nice thing about things being quite different is that I can now write about it. Note that I’m describing my observations, not giving advice on how to behave in Japanese traffic: Some things I regularly see are either wrong according to what the police told us at the security training last week or just seem dangerous to me. So don’t get any stupid ideas and then try to blame me for them. 😉

Roads in Japan are usually narrow and don’t have sidewalks. Sometimes medium-sized roads have sidewalks, but more often they don’t. Only the biggest roads almost always have sidewalks. Below this paragraph is a photo of a pretty typical road close to my home. You can see that there isn’t much room, and pedestrians, bicycles and cars have to share it. You can also see the plastic or metal ramps most homeowners use to make it easier for their cars to get into the parking space. I suppose the small roads are one of the reasons most Japanese cars (including trucks) are quite small.

I’m still not completely used to sharing the road with cars while walking, while I got used to driving my bicycle on the left side of the road surprisingly fast. It’s a weird feeling having cars and bicycles passing by with a distance of maybe just a half meter.

There is a very high number of zebra crossings and traffic lights in Japan, even in the smallest roads. This is the gate of the junior high school next door: 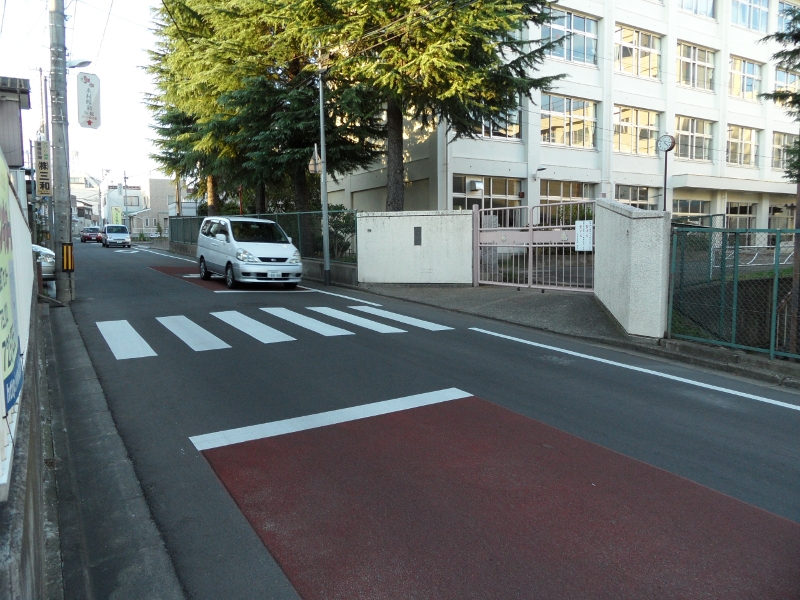 Nothing unusual about a zebra crossing in front of a school, right? Think again. This is the view from the gate:

The zebra crossing ends in a wall. In Germany people would probably say that it doesn’t make sense to build a zebra crossing in a place that does not have sidewalks, but the Japanese seem to have other ideas about this. Something that people from many other countries should keep in mind is that the road markings for traffic lights and zebra crossings are identical in Japan. The only difference is the presence or absence of the actual lights or signs announcing a zebra crossing. I really like the following picture, which shows a kind of traffic light I didn’t know before. They are pretty common here, I suppose because only one pole is needed to support all necessary lights. Originally, I just wanted to document the new kind of traffic light, but I think the background turned out quite nice as well. 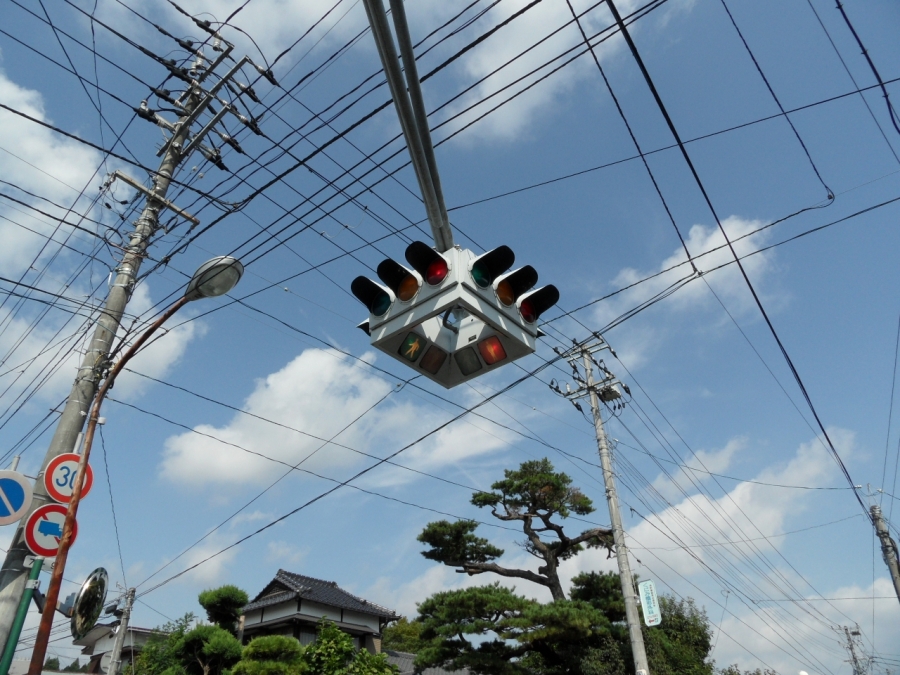 Japanese use bicycles a lot, and most have a simple one with a basket above the front wheel and a rather low saddle. Actually, I have one of the same kind – I picked the largest one that was available, but it’s still a little too small for me. And while car drivers really careful compared to Germany, people on bicycles seem a lot more daring: I often see people ride on the right side of the road or crossing red traffic lights, sometimes talking on their cell phone. One of the other exchange students told me that she saw someone riding his bicycle while holding an umbrella and talking on the phone.

To illustrate how many people use bicycles, here’s a photo of one of the bicycle parking areas at Kawauchi campus. Riding my bicycle to the university in the morning is fun: students will gather from all directions, and I often arrive with a group of 20 or more students.

My impression is that people here drive more carefully than in Germany, and often seem to prefer polite and careful behavior instead of insisting on traffic rules. Also they drive slower, the small roads might be contributing to that. As a pedestrian I try to avoid sudden changes in my direction, so that drivers can guess where I will be when they pass by.

One fun thing are the talking traffic lights. Not all traffic lights in Japan talk, but those that do will tell you with a friendly female voice when they turned green – or blue, as they call it here (although the same word “青” can be used for green under certain circumstances I don’t fully understand). The step from talking traffic lights to a dancing robot girl is not that far, or is it?

4 thoughts on “Traffic in Japan”